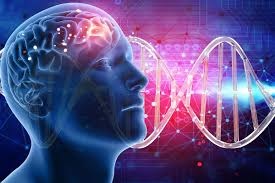 Our genes control us! That’s what many people believe, including actress Angelina Joli, who had her breasts removed because she was told that she was genetically predisposed to breast cancer! It’s long been the predominant theory in the medical profession, but now all that’s changing.

A relatively new field of research, called epigenetics, is showing that external factors, like diet, exercise, toxicity and stress, play a major role in switching genes on and off. Cells turn on, or express, only a fraction of their genes, while the majority are repressed, or turned off. This process is called gene regulation and is an essential part of cell development. So just because your grandfather, your uncles and other family members all suffered from heart disease, does not mean that you are fated to have the same problem. Yes, you may have a susceptibility but your lifestyle choices play a far greater role in determining whether your get heart disease or not.  Similarly, just because a large number of the women in your family suffered from ovarian or breast cancer, doesn’t mean that you are going to be afflicted by the disease. Of far more importance are the eating patterns, ways of dealing with stress and thinking patterns (negative or positive) inherited from your mother. Change those, if they put you at risk, and you can change the way your genes express themselves.

This is exciting information, because it shows us that we can control our health risks and, by making the correct choices, reduce our risk of developing chronic diseases. A recent article in Scientific American, entitled ‘How diet can change your DNA’(1), shows that this is not a new idea. In fact, they mention research going back decades.

A major review of scientific research (2) shows that antioxidants can play a major role in preventing brain damage and cognitive decline. Among the research reviewed are the following interesting findings –

A 2013 review showed that giving women a probiotic supplement during pregnancy, and then to their offspring during childhood, significantly reduced the incidence of allergies. According to the researchers “babies who were exposed to probiotics in the womb and received supplements after birth had a 12 percent lower risk of allergies in the following months and years than kids in the comparison groups.” (6)

A brand new study, published in 2018, shows that supplementation with Vit B12 in children can affect genes that lead to the development of Type 2 diabetes, lowering the risk of the disease.(7)

And last but not least. A 2014 study showed that endurance exercise had a positive effect on ±4000 genes, leading to significant health benefits.(8)

These are just a few of many studies showing that we can change our risk of disease by our lifestyle choices. The bottom line is that we do not have to be at the mercy of our genes. Good choices regarding diet, exercise and attitude can make profound differences.

For more health info go to the Health News page